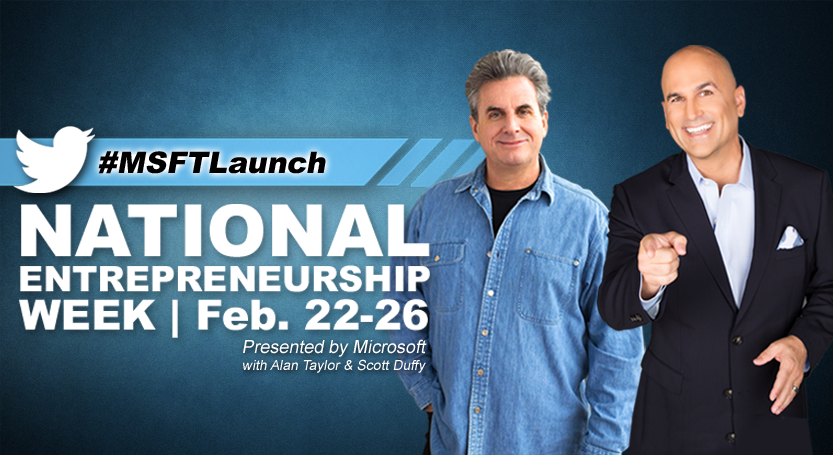 Where did today’s biggest companies get their start? In the MSFT Launch Video Series, award-winning radio and TV host, Alan Taylor, and best-selling author, Scott Duffy, explore the humble origin stories of today’s leading brands and the visionaries behind them. You can follow the conversation and receive daily updates on Twitter with #MSFTLaunch. The video series will begin on February 22nd, so mark your calendars! More coming soon… 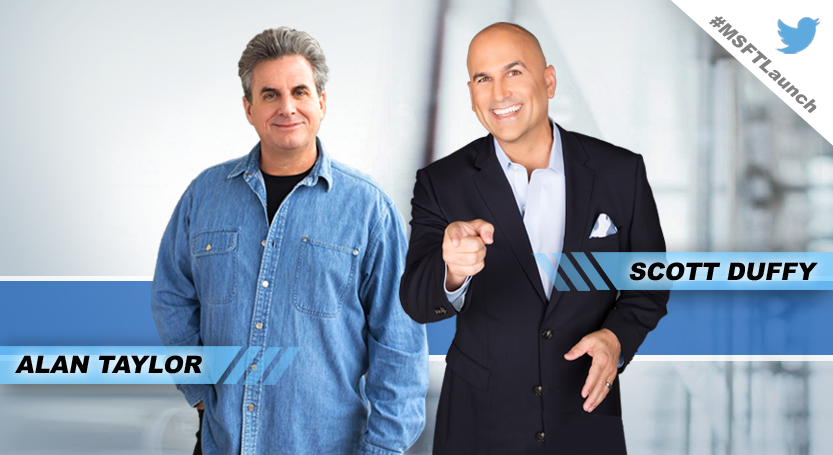 Scott Duffy is an entrepreneur, keynote speaker, and best selling author of Launch! He is ranked a Top 10 Keynote Speaker by Forbes and is Special Projects Editor of Launch at Inc.com.

Alan Taylor is an award winning radio and TV host and a 30-year broadcast. As a founder of Benchmark Entertainment in 1995, Alan pioneered the business of creating radio shows as an extension of the magazines they represent. Benchmark orchestrated innovative partnerships with leading publishers to replicate their content on-air, bringing their brands alive to a much larger audiences. Today Alan partners with some of the Nation’s largest publishing houses. He is, on behalf of the Entertainment Right Now, the host of some of the most popular weekend talk shows in radio today: Inc. Radio, Popular Science Radio and The Drive with Alan Taylor.

Scott Duffy and Alan Taylor interview Matt Theriault is President/CEO Epic Real Estate and a fifth generation California native, Desert Storm Veteran (USMC) and host of the #1 real estate investing podcast on iTunes, Epic Real Estate Investing. When he’s not building his own income-based real estate portfolio, he and his company shows busy professionals how to build theirs, builds it with them and/or builds it for them so that they can retire while they’re still young enough to enjoy it.

Scott Duffy and Alan Taylor interview Richard Swart,Chief Strategy Officer of NextGen Crowdfunding. Dr. Richard Swart is recognized as a global thought leader in the crowdfunding industry. He has lectured in Europe, the United Kingdom, Africa, the Middle East and throughout the United States. He is the Chief Strategy Officer for NextGen Crowdfunding – an innovative company helping startups and investors learn to navigate the new era of online capital raising through equity crowdfunding.

Scott Duffy and Alan Taylor interview Gene Lim. Gene Lim is a visionary entrepreneur with global resources and over 25 years experience in marketing. He is the CEO of MAV12, a full-service integrated marketing and advertising agency specializing in strategy, branding, producing content, celebrity/influencer integration, and leveraging proprietary hyper-targeting technologies through digital, mobile and social media. Gene also works with non-profit business and government groups promoting entrepreneurism around the world.

Scott Duffy and Alan Taylor interview Kevin Harrington. He is the inventor of the infomercial, original Shark on Shark Tank, and Pioneer of the “As Seen On TV” Industry. He has launched over 500 products resulting in more than $5 Billion in sales worldwide.

Jason is a 25 year serial entrepreneur who’s companies operate in 26 states employing over 2500 people. His passion is business and he spends part of his week coaching top CEO’s around the North America.

Visit his websites at CollegeWorks.com and CEOCoachingInternational.com to learn more.

Scott Duffy and Alan Taylor interview Greg Reid. Greg is an author of the Think and Grow Rich Series, and his Secret Knock events are ranked in the top 3 must attend events for Entrepreneurs by Forbes.

Learn more about the Secret Knock events at SecretKnock.co

Scott Duffy and Alan Taylor interview Pooneh Mohajer. Pooneh Mohajer, CEO and Co-founder of tokidoki, is a serial entrepreneur who in 1999 sold her first company Hard Candy Inc. (a color cosmetics company that revolutionized the nail enamel and cosmetic industries worldwide), to LVMH, Moët Hennessy Louis Vuitton SA, an international luxury goods conglomerate. Since 2005, Pooneh has overseen the growth of tokidoki into a global lifestyle brand which has amassed a cult-like following for its larger-than-life characters, megawatt partnerships and diverse array of products, ranging from handbags to apparel to slot machines. Pooneh received her Juris Doctor from California Western School of Law and her BA from Vanderbilt University.

Scott Duffy and Alan Taylor interview David Meltzer. David Meltzer is the CEO of Sports 1 Marketing, a global sports marketing agency he co-founded with Hall of Fame Quarterback Warren Moon. Knighted by the order of St. John of Jerusalem as Sir David Meltzer, he is a National Best-Selling Author of Connected To Goodness, a Forbes Top Ten Keynote Speaker, Variety Magazine’s “Sports Humanitarian of the Year”, and a recipient of the Ellis Island Medal of Honor. He has spent the last 25 years an entrepreneur and executive in the legal, technology, sports and entertainment fields which has given David the background to uniquely position him has a world-renowned thought leader.

From Hover Board to Online Poker, Dan Fleyshman shares how to build a business empire. Scott Duffy and Alan Taylor interview Dan Fleysham, CEO of First Slice Media. Dan is the youngest founder of a publicly traded company in history. He sold his first product into 55,000 retail stores before creating www.1stslice.com which has had over 300,000,000 page views. He also creates backpacks for the homeless filled with 150 emergency supply items and is an active angel investor into 25+ companies.

Learn more about Dan at:
www.victoryceo.com

From early stage to successful exit, Scott Duffy and Alan Taylor share how the best ideas sometimes come from the most surprising places.